Sage 300 ERP allows user needs to choose and change the structure code that appears as the default when one adds new accounts. G/L Options Segment Tab facilitate the users to set up the structure code.
The following are the points which need to be considered during the set up of structure code:
1.User needs to specify during setup which segment in ones account numbers represents the account code. (User cannot change this setting later.)
2.User needs to Specify during setup which character should be used to separate account segments. (User cannot change this delimiter later.)
3.The user needs to define the segments (divisions or portions) one uses in ones General Ledger account numbers.
4.The user can add the number of segments which depends on the edition of Sage Accpac user is using at any time:(For example: In Sage 300 ERP Enterprise.
Edition, up to 10 segments can be created while in Sage 300 ERP Advance Edition, up to 4 and in Sage 300 ERP Standard Edition, up to 3 segments can be created.
The following screen shot is provided for G/L Options Segment Tab : 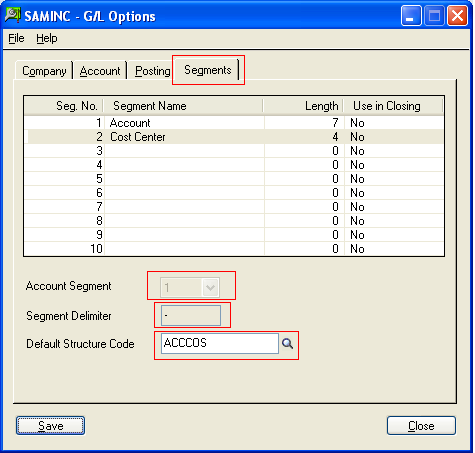 Here in the above screen shot the Seg.No.1 has been specified as   Account Segment which can’t be changed later as well as [-] has been specified as Segment Delimiter which can’t be changed later.
5.Each account number can contain up to 45 characters, including segment delimiters (separator characters).
6.In a General Ledger account numbers one can define up to ten segments to be used.
7.The length of a single segment must be grate than 0 and less than or equal to 15 characters.
8.For deleting a segment, it must not be assigned to an account number structure.
9.Default structure code “ACCCOS” will be placed by default when one goes to add a new account in a G/L Account.
New Stuff: Sales History For all Costing Method
An account structure identifies which account segments are used by particular accounts in your general ledger, and the order of those segments in the account number. See the following screen shot:

For example: Here in the above screen shot the Structure Code “ACCCOS” uses two segments in the Account. So whenever a new account will be created using the Account structure Code “ACCCOS”. The first segment represent the Account Number and other segment will represent the cost Centre which will be separated by delimiter [-].
Thus with the help of these simple settings, one can allocate segment codes on the G/L  Account Structures.
Also Reads:
1.  GL Handling of Expensed Additional Cost – I
2.  GL Account History Inquiry in Sage 300 ERP
3.  General Ledger (GL) Accounts Distribution in Sage 300 ERP
4.  Link General Ledger Entry to the Original Transaction
5.  GL Account Code Change in Sage 300 ERP